After fourteen years and five studio albums, his former band Yeasayer—art rock experimentalists whose sonic concoctions often felt like a musical lab leak—broke up in late 2019, just before COVID-19 began careening across the planet. Friends fled for rural retreats, while Wilder’s family stayed in Brooklyn so his wife could care for her patients as a midwife, and he could resume full time parenting for their two daughters.

Professionally, it was an abrupt record scratch moment for Wilder, a veteran touring musician and ceaselessly collaborative bandmate. But Wilder was determined to press on creatively despite the isolation and the disintegration of his beloved former group. He had always blended his music with domestic rhythms at home in Brooklyn, where some of Yeasayer’s later records were also cut. Now, casually picking out Max Romeo’s “Uptown Babies Don’t Cry” or Lovin’ Spoonful’s “Rain on the Roof” for the kids at bedtime could ignite late night writing and recording jags.

He soon realized he was passing an intergenerational baton: “My mom, who was born in India, is a huge music lover. Whatever we were doing, the Beatles, Cat Stevens and Fairport Convention were playing in the house through these homemade speakers my father had wired. The lockdown brought all that back to me, and the music I began making translates that musical mood of my childhood for my family now. I wanted to go back to basics, back to songs. Light on electronics and experimentation, heavy on acoustics and vocals.”

The outcome is his first solo album I Don’t Know My Words. Ten songs, in braided strands of English folk revival, Topanga Canyon jangle, and desert blues licks, offer taut documents of a gloomy hour of collective confinement, but also elegant proofs of folk rock songcraft’s inexhaustible machinery. Wilder reveals vulnerable moments of pandemic panic and addresses the challenges of love and dedication as he follows New York’s path through the worldwide emergency, and as he confronts the personal, political, and professional reckonings that spanned it.

Wilder’s reputation as a talented multi-instrumentalist, singer and songwriter emerged in the Brooklyn indie rock scene of the late 2000s, where he joined his bandmates in painting on the eclectic palette of synths, strings, and harmonies that defined Yeasayer’s acclaimed psychedelic worldbeat and swerving electro-pop experiments. He was at home writing and fronting big hits like Yeasayer’s “O.N.E.,” and “Wait for the Summer,” but the spirit of community always pervaded his surprising collaborations, from the guest-star-studded recordings of the peculiar rock musical album Break Line (2014) that Wilder composed with college friend Maxwell Kardon, to his occasional production credits for fellow travelers like Suckers and Das Racist.

With I Don’t Know My Words, Wilder torques his multi-instrumentality away from electronica and global genre-hopping and makes it a lonely lockdown challenge. Aside from ambient documentary noise of family life and New York’s mysteriously pervasive rash of fireworks, he played every sound on the album, from a plucked cello on “Get More Than My Share” to the bowed acoustic guitars heard in “Sick Hotel,” which simulate a string section. In oscillating textures of dulcimers, twelve-strings, and tumbling, song-serving drums, he arpeggiates, beats, and blasts out moments of elevated feeling from tedium and routine.

“After some initial attempts at collaborating with outside musicians, I realized that I needed to have my hands on every aspect of recording my first solo effort. So much of the pleasure of making this album was reigniting my childhood passion for challenging myself to pick up any instrument.”

Confronting all the old riddles of musical composition, here he collaborates instead with his many influences. “If I was feeling like a chord progression was going wrong, I kept asking myself ‘what would Richard Thompson do here?’” Thompson may be a particularly privileged guide, but Wilder roams a large universe of allusions. He cribs chorale rounds from Donovan, nods to Poly Styrene in stray lyric choices, winds through solos that evoke the Persian psych-rock of Kourosh Yaghmaei and conjures characters and story songs after Harry Chapin. Every absence hold meaning as well—the stripped-down instrumentation of “I Don’t Want Our Love to Become Routine” abandons the complex sonic textures of Wilder’s earlier work for a refreshment of the fundamentals, a disposition the song links lyrically to a parent’s love life, and musically to the Plastic Ono Band.

Fittingly for someone playing all the parts, Wilder sings in many moods and characters as the album roves over the artist’s place in the music business, the health crisis, family life, and politics. The cover art, painted from memory by the artist Sanya Kantarovsky, renders Wilder with a filial marionette on his shoulders, recalling the Polish avant-garde happenings of Tadeusz Kantor who performed with a puppet of himself. Pulling such strings, Wilder’s multiplying lines of self-inquiry give the album complexity, but because the same, gentle voice sings throughout, a welcome cohesion of concept emerges instead of his former band’s emphasis on shapeshifting restlessness.

Quarrels with careerism lend the album one persistent theme. The lead track “Beginning Again” is an unvarnished Yeasayer breakup song which began as a bedtime lullaby for his daughters. The simple lyrics declare Wilder’s artistic philosophy as cleanly as you’d find in an old troubadour poem. It’s a musical tone-setter too, opening with a twelve-string electric picked with a penny, creating a madrigal shimmer over a piano progression played at a wobbling tempo that suggests the medieval revivalism of Steeleye Span.

Two headlong COVID elegies track the anxious mood and the gut checks of social inequality felt in the early days of the pandemic, when Wilder’s spouse would return from her work at the hospital with news of the overflow morgue trucks and the junkets of billionaires heroically securing a private hospital system’s PPE from China. “Hart Island” and “Sick Hotel” risk speaking of such moments in character—“Hart Island” from the perspective of Riker’s Island inmates digging anonymous graves at New York’s potter’s field even as they lacked basic sanitary provisions in prison, and “Sick Hotel” in the voice of those prematurely discharged from overcrowded hospitals and left to watch preening political speechifying. These songs abound with plangent vocal ironies and arguments between form and content. On “Hart Island,” when a portamento phrasing of “second wave” changes keys as it rhymes with “grave,” Wilder lifts his listeners toward strategically stagey idioms of social awareness hearkening to American folk opera. On “Sick Hotel,” his voice glides from hushed verses to mounting refrains even as his persona chokes from the crush of respiratory disease.

“I wanted to write a ‘last gasp’ of the cornucopia of well-arranged chamber pop technicolor.”

The mood of New York enflamed with paramedics brings other songs into its vortex. Wilder wails like an ambulance through “Fever Seizure,” a dramatic personal story song about an infant daughter’s emergency. It isn’t the only moment of personal disclosure. “Half Brother” reveals the true story of Wilder’s efforts to solve a genetic mystery about his extended biological family. It’s a feminist rumination on fathers, vasectomies, sperm donors, and 23andMe discoveries, laid down in acoustic molasses.

“This one is kind of an homage to lo-fi ramshackle solo artist albums like Skip Spence’s Oar,” and the mono mix suggests “a single celled organism emerging from the muck through mutation into something much more complicated.”

Wilder’s interest in traditions of acerbic social criticism from Phil Ochs’s “Love Me, I’m a Liberal” to Ian Svenonius’s treatises on “guilt extraction” lend his songs a satirical sheen. In “Get More Than My Share,” Wilder intones wry celebrations of greed over a droning Indian raga, a faithless music mogul’s cultist foot-tapper. And with an irreverent insistence on rejecting liberal dogmas and pieties, “Porcelain Doll” confronts his disappointment with stealthily persistent attitudes of white saviourism and a discomfiture around immigrants he’s observed even in industries such as Hollywood that proclaim their social awareness. Wilder dares you to sing along with his Wreckless Eric-inspired chorus, offering absolution for the awkward messiness of articulating racial and social differences.

For an album written and recorded with so much family right in the room or held close in the heart, it is no surprise that the title I Don’t Know My Words is a quotation from his daughter Zazie, the accidental poetry of childhood grammar. “I Don’t Know My Words” could sound like a blanket mood of apology or disavowal. But in Wilder’s malty homebrew record, it affirms how mistakes—in language and life—can be the very grounds of invention and recreation 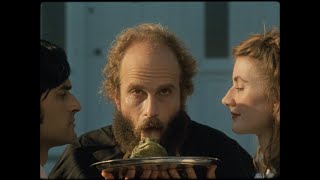