“Any time a punk band starts experimenting, that’s the era of the band that I love,” remarks Dirty Ghosts guitarist and songwriter Allyson Baker while discussing the genesis of Let It Pretend, the band’s forthcoming sophomore effort for Last Gang Records set to be released October 2nd, 2015.

Baker is no stranger to experimentation herself. The Toronto native got her start dealing out ferocious riff rock with Motorhead-inspired hardcore outfit Teen Crud Combo in her hometown before she relocated to San Francisco and founded fuzzed-out, funky psych blues quartet Parchman Farm. But after that band split in 2006, she moved in a decidedly different sonic direction that would lead her to Dirty Ghosts.

Baker has stayed busy since then, contributing vocals to the track “Station” on “Thriller!” by !!!/Chk Chk Chk and guitar, bass and vocals to two upcoming albums by Kelley Stoltz, but her thoughts inevitably turned to writing songs for the next Dirty Ghosts album. While she remained on good enough terms with her ex to play on Aesop Rock’s album Skelethon, Baker’s initial woodshedding to come up with new material was done solo.

“I was listening to music and making demos every night,” remembers Baker. “I just kept doing it until it started to sound like something.” Writing the material on her own in the wake of both her marriage and her band falling apart (only longtime friend McDermott would remain from the live line-up) colored the emerging songs with lyrical themes of isolation, uncertainty and clouded perception. But as the tracks started taking shape, Baker found an able creative partner with the addition of talented drummer Tony Sevener.

Hired to fill in for a 2013 Noise Pop appearance, Sevener was soon made a full-fledged band member. Past experience working on the soulful, cinematic instrumentals of skateboarder-turned-songwriter Tommy Guerrero and as a member of singer Bart Davenport’s noted indie-funk group Honeycut .

“Tony came in and got involved in the songwriting, making it more of a band” explains Baker. “He taught me a lot about how to look at music from a pop perspective.” If Metal Moon was as Baker describes it “a scrapbook of five years of experimentation,” the new tunes recorded for Let It Pretend with Phil Manley (of The Fucking Champs and Trans Am fame) reveal laser-focused songwriting that marries insistent, angular guitars to indelible hooks.

Lead-off track “Some Kids” leaps from the speakers with tribal drums, a loping bassline and the clatter of a kicked over beer bottle. The tune spotlights Baker’s plaintive vocal melody and an earworm chorus over layers of echo-soaked, interlocking guitar. Nodding to the downstroke-heavy rhythms and ethereal textures of The Stranglers and The Police on “Battery” and the pulsing, perfectly crafted title track, Baker shows off a spare six-string approach that places each slashing chord and ringing note with deadly economy and accuracy.

Though tracks like “Light Like Speed,” “So Shallow” and the ferocious “Cataract” bear the unmistakable imprint of pioneering synth-punk acts like Devo and Baker’s avowed cornerstone influence Chrome, the latest Dirty Ghosts effort places an elevated focus on nuanced song craft and pop melodies carried by her growing confidence as a lead vocalist.

“I think the music you grew up listening to is something that stays with you forever,” says Baker with a bemused grin. “I think I’ve always repressed it. When I was a kid, Duran Duran were my world.” It’s that embrace of ‘80s pop confection and the collective consciousness of the era’s sound balanced against Baker’s harder edged aesthetic to make Let It Pretend such an irresistible listen. 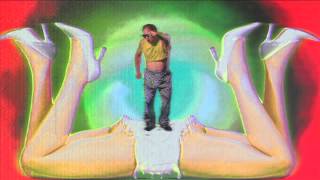 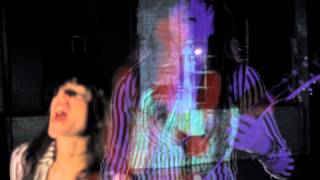