After sixty-five fortnights, Purity Ring have returned with their second album, Another Eternity.

The pair ventured home to the frozen industrial landscapes of Edmonton, Alberta, their birthplace, to document much of what was to become the album. For the first time, vocalist Megan James and producer Corin Roddick were able to create a record in the same room.

Purity Ring’s first album, 2012’s Shrines, was recorded separately in Montreal and Halifax, where Corin and Megan were respectively living at the time. Despite being a thousand kilometers apart, Shrines was a cohesive, beguiling and wholly unique universe of what the band called “Future Pop.” At the center of the amniotic swirl of Shrines was an undeniable nucleus of crystalline pop which presciently suggested both indie and popular music to come. They quickly amassed a rabid fanbase, toured relentlessly and sold out shows worldwide, earning “Best New Music” from Pitchfork and praise from The New York Times, Rolling Stone, and NPR, among others.

On Another Eternity, released on March 3, 2015, Purity Ring trade the gorgeously claustrophobic atmospheres of Shrines for wide-open, muscular vistas of sound and luminous, up-front vocals. Crafting a lyrical universe of “sweat and dreams” populated by seacastles, rattling spines, and weeping drawers, Megan James wields concrete imagery and metaphor with increasingly direct, startling resonance. Corin Roddick’s gifts for evocative melody remain intact, but his drum work and use of space have been completely reforged: immaculately built and focused in service of the song.

Though they are now working at a higher resolution, Purity Ring remain hands-on with every aspect of their project. As usual, the band produced and recorded Another Eternity entirely themselves. The pair worked to develop an innovative new live performance, and Megan designed the band’s onstage and video fashion. 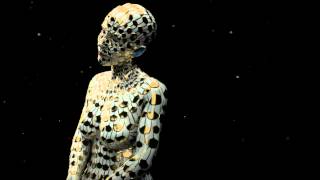